From Brown bee
Jump to: navigation, search
The Nordic brown bee (Apis mellifera mellifera) was the first honey bee subspecies
a biological classification category ranking below a species; a genetically distinct population which can reproduce with populations of the same species where they overlap geographically
to colonize northern Europe, which is why it has adapted to northern environments in many ways. The Nordic brown bee was also the first subspecies to be farmed for honey production in these areas. Now, this unique bee’s existence is threatened in its native habitat. The remaining populations of this unique bee can only be conserved with successful practical beekeeping. This is why we need more beekeepers who are interested in and able to keep Apis mellifera mellifera bees. 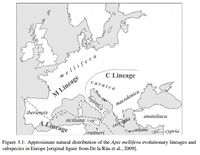 Because of long-term adaptation to the Nordic environment, the Nordic brown bee has some special features in its physiology, behavior, and in its responses to the environment. All this must be taken into account during the set up of the bee yard and it's hives as well as the management and handling of the bee colony. This wiki is designed to help you find practical and suitable management techniques for keeping Nordic brown bees.

If you’re considering keeping Nordic (A. m. mellifera) bees, please find out what type of bees are already found in the vicinity of where you want to establish a bee yard. Cross-breeding is a danger when different subspecies are found close to one another and at least uncontrolled hybridization
a biological process in which two individuals of different taxonomic categories, for example subspecies, interbreed and produce offspring
should be avoided.

If you have decided to get A. m. mellifera bees, you have to find a Nordic brown bee breeder. Keep in mind that you don’t have to have an entire colony of Nordic bees at first. Instead, you can just get a mated pure A. m. mellifera queen and replace the queen in an existing colony with that queen. The new queen will then produce new offspring of her own subspecies in a couple of months, and the whole colony will gradually turn into Nordic brown bees. Sometimes, however, it is difficult to introduce an A. m. mellifera queen to a different subspecies’ colony. For some advice on this issue, check here.